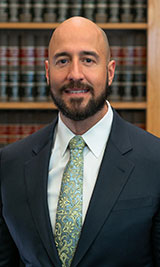 Patrick Campion is an associate at the law firm of Gerstenzang, Sills, Cohn & Gerstenzang. Prior to joining the firm, Mr. Campion was an Assistant District Attorney for the Saratoga County District Attorney’s Office for over a decade. During his tenure as a prosecutor he became the Bureau Chief of Vehicular Crimes, supervising the unit of attorneys in the office specializing in the prosecution of felony and misdemeanor DWI cases as well as vehicular crimes involving serious physical injury or death.

Prior to becoming an Assistant District Attorney, he was an Assistant Public Defender for the Schenectady County Public Defender’s Office. Patrick is a graduate of Albany Law School and was admitted to practice in New York in 2005. He received his Bachelor’s Degree from Siena College.

Mr. Campion’s practice is focused on criminal defense – with an emphasis on impaired driving offenses and other vehicular crimes.