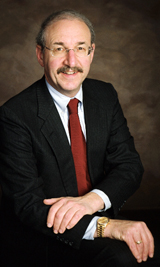 Peter Gerstenzang is the senior partner in the Albany law firm of Gerstenzang, Sills, Cohn & Gerstenzang. He is a 1970 graduate of Albany Law School.  He is one of only four lawyers in New York State who have been Board Certified as specialists in DUI Defense Law by the National College for DUI Defense (“NCDD”).  The NCDD is the only organization accredited by the American Bar Association to certify attorneys as specialists in DUI law.*  His practice focuses on Criminal Defense with an emphasis on DWI cases and Vehicular Crimes.  In addition, Mr. Gerstenzang is listed as a top DWI attorney in the following publications:  The Best Lawyers in America®, The New York Area’s Best Lawyers®, and New York Super Lawyers® Upstate Edition 2021.  He is listed as one of the “Top 25 Hudson Valley Super Lawyers 2011” regardless of category.

Mr. Gerstenzang commenced his legal career as a prosecutor for the United States Army in the Republic of Vietnam. From 1972 to 1975, he was an Assistant District Attorney for the County of Albany. Certified as a breath test operator, he taught at the New York State Police Academy in their Breath Test Training Program for 12 years. Mr. Gerstenzang currently serves as a Dean Emeritus and Fellow of the National College for DUI Defense, which holds an annual seminar in Cambridge, Massachusetts on the campus of Harvard Law School. He is the former Chair of the Traffic Safety Committee of the Criminal Justice Section of the New York State Bar Association. In 2020, he was granted the status of “Board Certified in DWI Defense Law, Senior Specialist.”  He previously served on NCDD’s Board of Regents from 2003 to 2013, as Assistant Dean in 2012-2013, and Dean in 2013-2014.  His book, Handling the DWI Case in New York, published annually by Thomson Reuters, is considered a standard reference for the defense of Driving While Intoxicated cases.